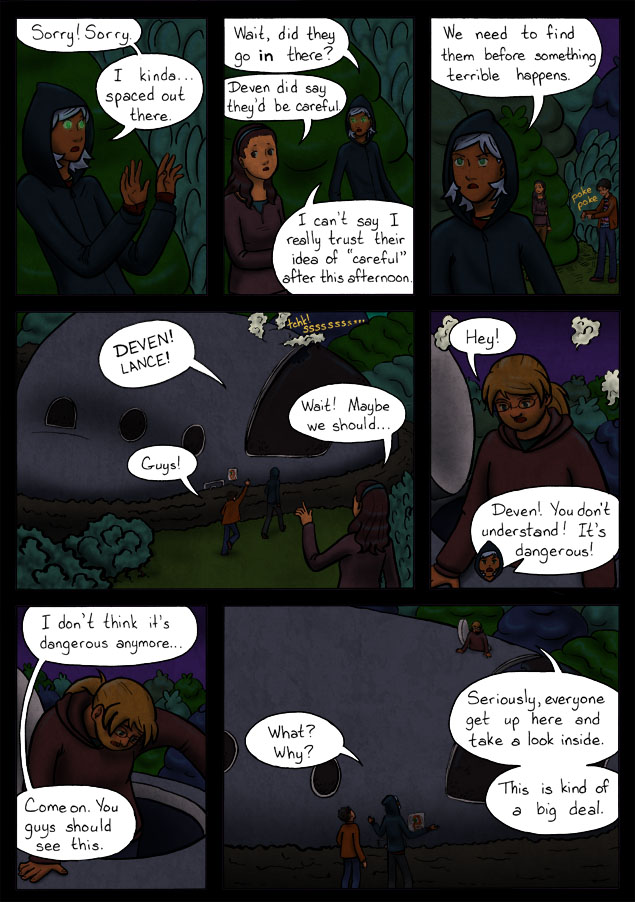 Good job on sticking to your guns there, Sashka. You show 'em who's boss.

I have to say that Ash poking his hand in the background made me giggle, a lot. Also, I cannot wait until these characters get some lighting again, because it is really hard to deal with characters in dark clothing in a dark forest/shipthing, and not go overboard with the highlights. I sometimes turn off a shadow layer or lighting layer, to see how different it is from the flats, and when I turned off the lights in this page, I could barely see a difference until I specifically looked at areas I knew had highlights in them :c

Photoshop and I are getting along rather well. No chugging, no crashes (yet), and a rather nice ability to snap my texture layers to the sides of the panels instead of having to very precisely line them up myself. I need to make a new brush for Deven's stubble, but what I'm using at the moment isn't terribad.

In other news, we have moved into the "rainy season" here in California. looks out the window at the blazing sunny day Apparently what they mean by rainy season, is that it rains during the night, and there might be some puddles or, heavens forbid, a bit of drizzle during the day. I'm thinking of going up for a soak in the hot tub this afternoon. In late January. Outside. This state confuses me.