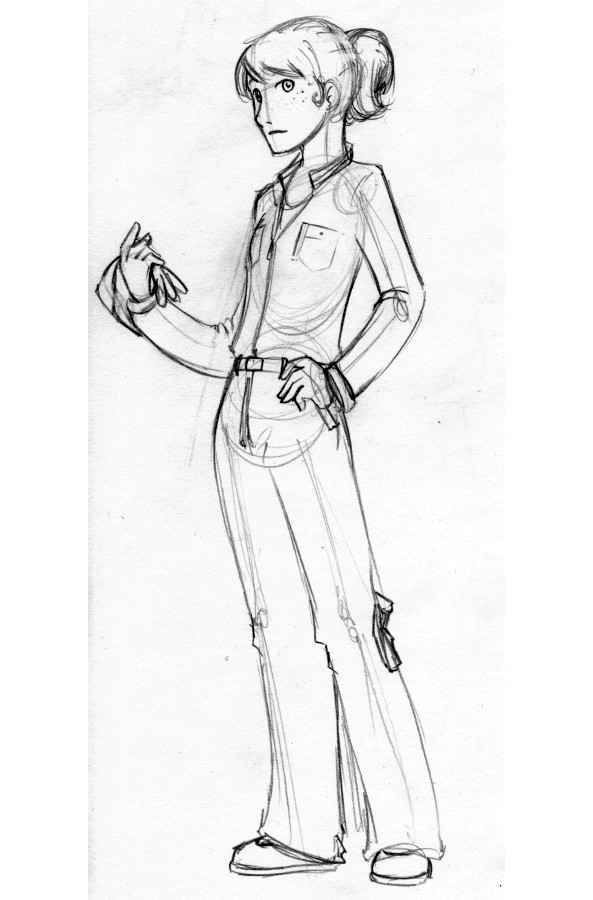 So I've been having a hell of a time getting through two pages a week lately, much to my own dismay and distress. Shamus has been trying to figure out what he can do to help me feel better, and a thing he suggested was to start posting a sketch every Monday instead of smashing my head against a page. We're going to see if this lets me get ahead on the pages a little bit, so that I can go back to two pages a week eventually, while not dropping all updates down to once a week. So you get to see some rough work from behind the scenes!

I need the time to do these rough sketches anyway, or else I have a situation like the day before I started page that Deimos appeared on recently (in the woods), where I frantically scribbled out some character designs to cement his appearance in my head again. As it was, I forgot to give him coat tails, so I'm just saying he has two suits, which freed me up to put him in a darker colour anyway. >_>

Sketches will be going up in their own subcategory so they won't disrupt a read-through of the archive, and they won't just disappear forever once they go down. They might be just a quick doodle in pencil, or I might go crazy and take the time to do a nice painted thing, or maybe I'll show a photo of my cat. Who knows!?

Sorry for all the delays and stuff lately. It bothers me just as much as it bothers you, only I have way more days to dwell on it! :D Hopefully this will help me get my feet under me again, and we'll be sailing away on a merry 2-page-a-week boat in the not too distant future.

Thanks for your comments and support. It really does mean a lot. <3

Head over to the "archive" link in the sidebar to see the sketch archive. Granted, there is only one thing there now, but I figured I'd point this out since Lesley mentioned that you would still be able to see them when they went down.